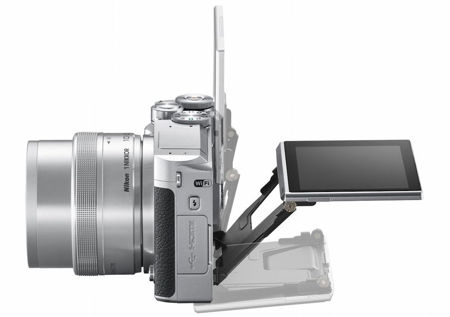 It is that time of the year again, when camera manufacturers roll out updated models to their previous releases with clockwork like accuracy. Having said that, Nikon has just announced the Nikon 1 J5, which so happens to be an advanced camera that will feature interchangeable lenses. While the Nikon 1 J5 might look like it is rather aged and old due to the relatively retro design, everything underneath the hood remains future forward for sure. For starters, the Nikon 1 J5 will continue from where the Nikon 1 J4 left off – which was incidentally released in the month of April last year, too, which means that we might be able to look forward to the Nikon 1 J6 one year from now if things were to continue at their present pace.

The Nikon 1 J5 is touted to deliver the world’s fastest continuous shooting with AF at up to approximately 20 fps, not to mention having the world’s shortest shooting time lag. With its full-scale specifications, you can be sure that all photos captured with this digital camera will be well worth developing – and it will include an effective pixel count of 20.8-million pixels, a backside-illumination CMOS image sensor, and the new EXPEED 5A image-processing engine, all of those crammed into a compact and lightweight chassis.

Not only that, if you happen to have purchased a brand new 4K TV, then you will be pleased as punch to know that the Nikon 1 J5 will also be able to record video of 4K movies, and then watching those videos back on your Ultra HD TV for maximum visual pleasure. The operation of the Nikon 1 J5 has matured to include a slew of features which will be able to deliver a whole lot more support for full-scale photography, including the Function (Fn) button, where you can assign a frequently used function to it, as well as a command dial which enables one to adjust settings while framing images, and a tilting LCD monitor that enables capture of self-portraits.