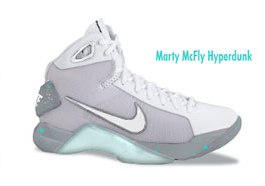 When I first saw Back to the Future II back in 1989, I remember being quite impressed with their version of the year 2015. At last, a science fiction film that presented the future not as a dark place, but something like today, with more advanced technology and its own set of problems.

Ever since I saw that film, I have always thought of the year 2015 as this giant due date. Now we have only seven years to catch up to this futuristic technology. We’re probably a long way off from flying cars, but Back to the Future II did show us something more probable: shoes that lace themselves.

The shoes from that film sported the Nike logo, and so the company has finally decided to mass produce those shoes from the movie. They have dubbed them the Hyperdunk, and they will be endorsed by none other than Kobe Bryant.

Unfortunately, these shoes lack the self-lacing or “power laces” feature that made them so interesting. The film also showed the Nike logo glowing once the shoes were laced. I’m guessing that this isn’t a feature either, even though it would be a way for Nike to get some more fancy advertising in.

In other words, the Hyperdunks are a “looks only” glimpse into the future. These shoes should be available sometime later this month, but no word on the price.