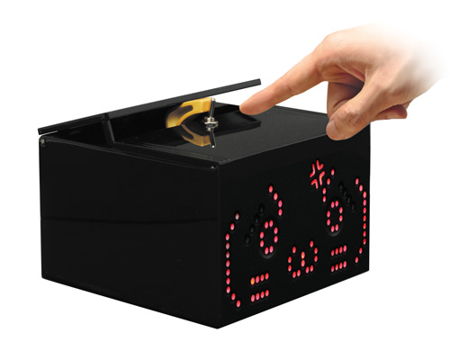 I am quite sure that in this day and age, if you were to pass a piece of paper and some color pencils or crayons to your little one, you would most probably be greeted by a blank look – as they wonder where one is able to access the “Home Screen” on the sheet of paper, as well as be on the lookout for a power button so that a screen or display can be turned on. Well, toys and games have become so sophisticated, so much so that some pencils and a paper might even be deemed to be archaic. Having said that, here is a cute “useless” gadget which will turn itself off – the $36 Nico Nico Douga Self-Switching-Off Robot.

As its name suggests, the Nico Nico Douga Self-Switching-Off Robot happens to be as “pointless” as it sounds. Still, this has not quite turned out badly for it, since it has become a Japanese internet viral hit ever since it was released. Created by Kairoshi and inspired by Claude Shannon’s “ultimate machine”, this particular gadget has ended up as a success story via a series of videos that have been posted to Nico Nico Douga, which is a video hosting service over in Japan. Half a dozen million views down the road, the robot actually churned out from a production line somewhere, and this is one addictive yet simple black box. You basically engage in a “battle” with the robot in order to see whether you are able to beat it at flipping the switch on and off.