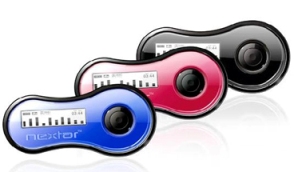 MP3 Players are nothing new, especially those non-video playing brands like the iPod nano and the Creative Zen Stone. It appears that Nextar is getting in on this midget MP3 action with the Nextar MA588, otherwise known as the Peanut.

It is called the Peanut for its shape, and it is available in both 1GB and 2GB capacity. It also has high speed 2.0 USB interface for fast file transfer, and it can provide 12 hours of continuous playback with one AAA battery.

The Nextar Peanut also has seven equalizer modes including normal, pop, rock, classical, jazz, bass, and soft. There are also associated play modes such as repeat one, repeat all, shuffle, intro, repeat folder, and random. The user support is available in seven different languages, and the entire device is only 2 inches long.

It sounds like Nextar wants this to arrive around Christmas, and they seem to market the Peanut as a stocking stuffer. I have to admit, that this device sounds like one of those “perfect gift” items.

The MA588 is available in five different colors including black, pink, red, blue, and silver. It is available at Staples, K-Mart, Bon Ton, Canadian Tire and other retailers. The price is about $19.99 for the 1GB version, and $29.99 for the 2GB.