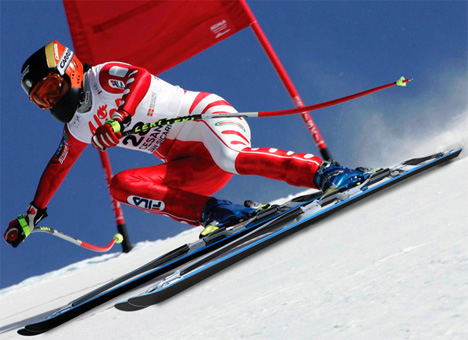 One wouldn’t think there’s much innovation left for a pair of skis. Sure, there’s innovation in construction, using super strong polymer materials for stronger flexing, yada yada yada. But in the end, they’re just two sticks strapped to your feet, right?. How much of a radical design can you get on that? What is needed is some radical out of the box designing … and there’s only one place to go for that, Yanko. 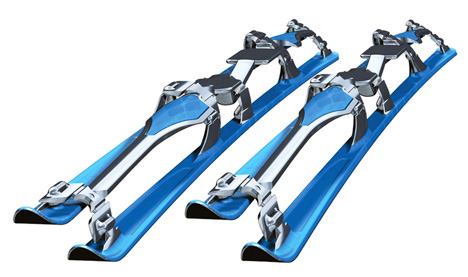 Designer Charlie Pyott has hit the nail on the designer head with The Twin Parabolic Ski – which is more a pair of outriggers strapped onto your feet. But the design is quantum leap and is based on the concept that more edges means better control on the downhill run as one turns. So why not double the number of edges? As Pyott puts it:

“The ski concept was purpose built for racing. Skis and snowboards share a lot of properties with boat hull design; in that longer and thinner proportions give more speed on hard-pack snow. The number of edges also helps maintain downhill speed in a turn. This can be seen when comparing standard skis vs a snowboard when turning at high speeds. The snowboard only has a single edge to turn on and therefore has fewer grips on the hill in a turn then a skier who can use two edges. This means that a snowboarder will have to check their speed to stay on a racecourse before a skier. The concept ski takes both of these ideas a step further, giving two longer and thinner surfaces under each foot and four turning edges. Offset bearings mean that all ski surfaces stay parallel under each foot.”

If Pyott is right, this new design could change the face off skiing competition and make times, and speeds, much faster. And that makes for more exciting Nordic competition.