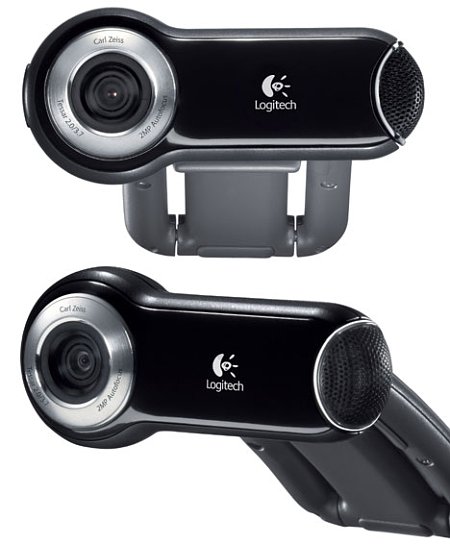 Webcams are pretty boring stuff – after all, how many of those can you go through before they all start to look the same? There is not much room for improvement in terms of aesthetics, mostly due to the fact that the best place for a webcam to be is still sitting pretty on top of your monitor. Granted, the form factor has changed over the years to accommodate thinner LCD monitors instead of those fat CRTs, but other than that, everything else remained pretty much the same (other than the increasing megapixel count, of course). Logitech has a spanking new webcam that was designed to thrill, and it comes in the form of the QuickCam Pro 9000.

This new webcam does not boast any ordinary lens, but using optics from Carl Zeiss – a name that is guaranteed to add weight to any device. After all, most Cybershot cellphones from Sony Ericsson as well as Nokia’s new range of multimedia phones come with Carl Zeiss optics that capture pretty good pictures that can rival those of a digital camera under the right conditions. What does the Logitech QuickCam Pro 9000 have on offer? For starters, it comes with a 2 megapixel light sensor with auto focus for sharper pictures and an improved software offering. Logitech claims that this new webcam beats the Apple iSight thanks to its auto focus, but the jury is still out on that one.

This webcam also boasts support for 720p HD video format, recording to discs at a resolution of 960 x 720 pixels (30fps) in a 4:3 aspect ratio. The Logitech Video Effects software gives personalized conversations a new lease of life, featuring 3D avatars, face accessories, as well as fun filters that are more than capable of matching actual facial expressions and motions. Each $99.99 purchase comes with a 2-year limited hardware warranty. Shipping begins next month, so if you’re involved in a whole lot of video calls (either at work or for long distance relationships), the QuickCam Pro 9000 does sound like a viable alternative.