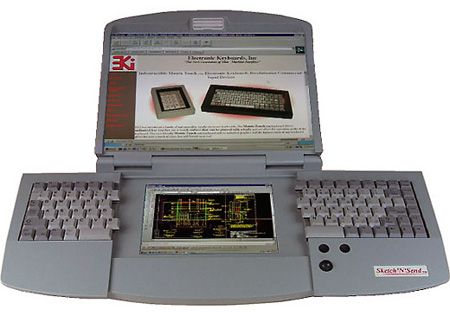 With more people struggling with the effects of carpel tunnel, it’s become more pressing for computer designers to provide more ergonomic options for users. This is also been a problem with laptop designs which struggle with ergonomic design and lightweight function, and the user usually loses the battle as laptop makers keep designing laptops with smaller, standard QWERTY keyboards. But this company not only decided to give users more room with which to type, it also figured out a way to give the user more screen real estate, very much like the Nintendo DS does. And it’s an idea that’s been around for nearly ten years and never capitalized on … until now.

It’s called the Ergonomic Dual Screen Split Keyboard Notebook Portable Personal Computer and the sweetness isn’t only the fact that the keyboard splits open to give a computer user more room to fit their hands, but that it has a second LCD hidden underneath it. What a fantastic idea.
The second screen works in concert with the first screen – giving the user a “drag and send” capability for open windows or programs, or act independently as a pen-based input screen for note taking, sketching, and just about anything else a user can do to write into the interface. This makes the EDSSKN of tremendous benefit to not only writers and word processors, but artists and designers as well.

Or, users can use the space to place notes in more natural position to type from.

The laptop is scheduled to ship later this year from Electronic Keyboards. Or, you can buy the patents outright!