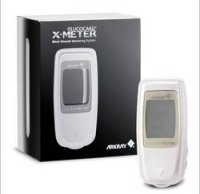 Home Delivery Medical will be offering their brand new Arkray Glucocard X-Meter, also known as the iPod of Glucose Monitoring Systems. Diabetics all over the world will definitely look forward to its release, as this device is sports sleek, bold and a simple look that might actually add even more credit to your overall geekiness. After all, it has already been years where the diabetic community has called for a glucose monitoring system that is not only functional but attractive. While companies have responded to this clarion call with smaller glucose monitoring systems, those required large blood samples while looking like a child’s plaything. Not so with the Glucocard X-METER, and you’ll know more about it right after the jump.

It is not hard to see why the X-METER is appealing to the senses (especially visually), as more often than not folks will mistake it for some sort of new MP3 player that’s in the market. The X-METER was specially designed with functionality, simplicity, and style in mind, requiring a mere blood sample size of only 0.3 microliters. In addition, it boasts the ability for alternate site testing, taking only 5 seconds to churn out a result, helping you save both time and your fingers as well. As for the Glucocard X-SENSOR, this is an auto-coded test strip which will immediately turn on the meter, doing away with the need for coding and buttons. All these are crammed into a sleek white body that measures no more than 10mm thin.

According to Michael Laico, VP of Operations for Home Delivery Medical states, “It is easy to see why people like this product. It is innovative, functional, and most people think it is an MP3 player.” Each X-METER Kit consists of the Meter, 60 Test Strips, Logbook, Control Solution, Lancing Device, 10 Lancets, and a carrying case. Folks who are Medicare eligible will be able to snag the X-METER for free.