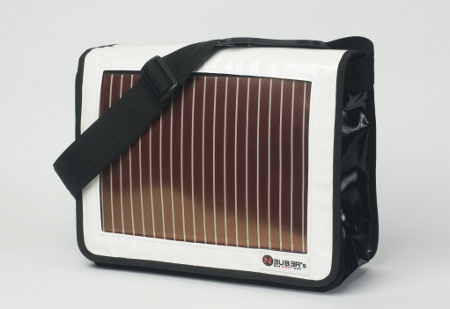 Solar power is pretty big, and as time progresses, research has pushed the technology even further forward with a greater degree of efficiency for its solar panels. After all, using renewable energy sources that are environmentally friendly as well is the way to go considering the non-stop explosive global population that might just stress the planet too much that it can no longer sustain itself due to rapid industrialization across the globe. For folks who tend to carry a bunch of gadgets with them wherever they go, the inclusion of their respective chargers could prove to be a bane to one’s shoulders, especially during long haul trips where light is the operative keyword here. The Neuber Energy Sun Bag solves this dilemma, offering more than ample room to store your range of cellphones, portable media players, handheld consoles and other devices while boasting Konarka Power Plastic solar panels on the outside, making it the lightest solar energy bag available on the market at the moment.

Contrary to popular belief that solar capable items need a heavy battery to go along with it, the Sun-Bags take a different route by tipping the scales at a mere 500 grams (sans your collection of gadgets within, of course) inclusive of the battery, bag structure and solar panel. For folks who have a hard time making decisions, the Sun-Bag is not going to help either since it will come in a whopping 37 colors with optional custom printing for that added level of customization.

Neuber’s Sun-Bags will be available worldwide, where pricing starts from 99 Euros upwards, depending on the design that you choose. It would be interesting to see just how well the Sun-Bags will do on the open market, since the entry level price might be just out of reach for most of the working class, especially in Third World countries where the need for renewable energy devices are even higher so that authorities won’t take short cuts in their industrialization process by dirtying the environment.