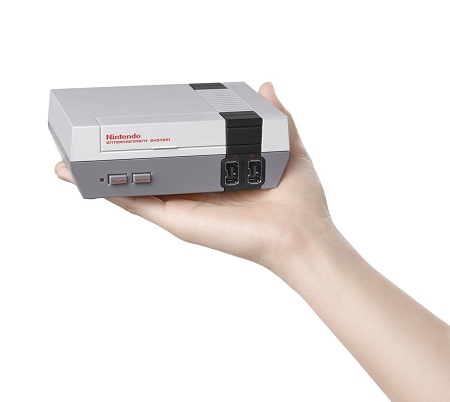 When you grow up loving a certain console, you aren’t exactly willing to let go of your favorite games when new consoles come out. Many have gotten emulators or clone systems so they can still play their vintage games on newer technology. If you loved the NES, you’ll be glad to know that Nintendo has finally taken the hint and is getting with the program of giving its audience a way to play older games.

While you won’t be able to get your hands on it until November 11th of this year, the NES Classic Console is shaping up to be a neat way to introduce the new generation of gamers to games that we loved growing up as kids. This is a miniature version that is almost a replica of the 1985 model. It does come with some upgrades as you’ll be able to hook this into your TV through an HDMI cable. It also comes with an original NES replica controller, and while it does support 2-player mode, you’ll have to buy the additional controller for $9.99, or use a classic or classic controller pro.

It doesn’t let you connect to your Nintendo accounts, but it does come pre-loaded with 30 games which includes Balloon Fight, Castlevania, Donkey Kong, Dr. Mario, Gradius, Ice Climber, Kid Icarus, Kirby’s Adventure, Metroid, Ninja Gaiden, Pac-Man, Super C, Super Mario Bros., Tecmo Bowl, The Legend of Zelda, and more! Despite not hooking up to accounts, you will be able to save your in-game progress. The system is going to cost you $59.99, and will be a must-have for any Nintendo fan.