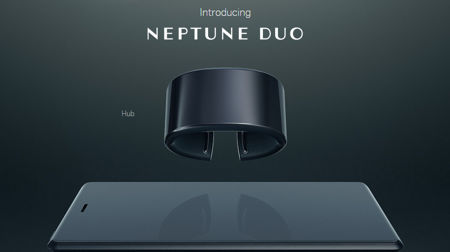 Wearable technology has become quite the byword in this day and age, and if a particular consumer electronics company has yet to jump aboard the wearable tech bandwagon, it would certainly not look too good on their resume or portfolio in the long run of things – at least for now. Well, Canada-based Neptune has just unveiled what they call the Neptune Duo, which so happens to be a two-device package that boasts of the world’s smartest wearable (this is self-proclaimed, so do take note of that), known as the Neptune Hub, while there is also a pocket-sized companion device that claims to reinvent the smartphone, the Pocket screen.

Just what does the Neptune Duo come with? For starters, it will be powered by a quad-core processor, while offering support for 3G/4G, Bluetooth and Wi-Fi connectivity, GPS support, NFC capability, all in the form of the Neptune Hub which so happens to be the world’s smartest wearable. The Hub will be able to wirelessly interact with Neptune Pocket, which is a 5″ interactive dummy display, where this particular peripheral is equivalent to the modern day smartphone. Similar to that of a mouse, a keyboard, or a computer monitor, the Pocket screen happens to be an interface for the Hub – and hence, there is no real need for it to be smart.

The Neptune Hub would enable users to place calls, send and receive messages, glance at notifications, track fitness and more, and all of these are achieved directly on the wrist, on its own. It does not matter whether you have the Pocket screen or not, as the user will always remain connected with the Hub. Pocket screens happen to be interchangeable to boot – you can always opt to borrow one from someone else if you forgot to bring yours along.

Apart from that, the Pocket screen also functions as a portable battery juice pack for the Hub, providing it with a recharge as and when required – thanks to its combined battery capacity of close to 3,800 mAh. This would mean the Neptune Duo is able to last a few days of normal usage on a single charge. Expect the Neptune Duo to roll out later this year, where reservations can be placed now with $798 to be paid upon shipping.