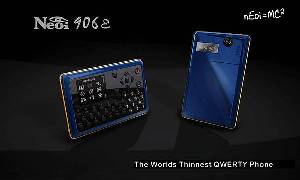 Another company has sounded off its “World’s (insert appropriate adjective here)-est” horn today as Neoi has claimed that their 906 series is the World’s Thinnest QWERTY Phone.

If this is true, then I am quite amazed at what Neoi packed into a device that looks more like a calculator than a cellular phone. To give you an idea of its size, the 906 is the size of a credit card.

This Tri-Band GSM/GPRS phone has a TFT display with 262K colors. Not only does it have a QWERTY keyboard, but it appears to have some other buttons that serve as shortcut keys of some kind. Other features include an audio player with an FM radio. The 906 can also record audio, and the camera is capable of recording video footage.

As for memory, the 906 comes with 512 MB built-in memory, plus an expandable Micro SD Card for up to 8GB of extra storage space. It is Bluetooth Compatible, and USB bi-directional. The company has said that users “will get more Applications as they evolve in beginning 2009″, and Neoi is very proud that this is “the world’s first micro-sized Java2Me Handphone”.

Sadly, it is not known when the 906 will be coming out, as the site doesn’t seem to give a release date or a price.