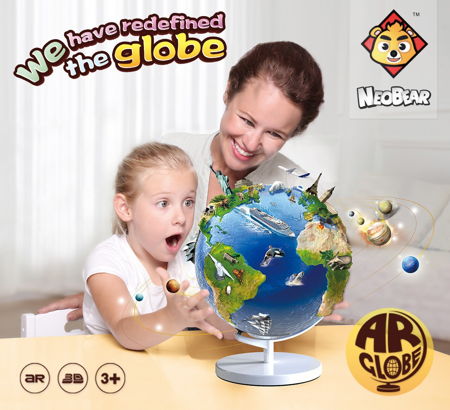 Children these days have a wealth of toys to choose from, where they are able to enjoy the different kinds of gaming options unlike our younger days where the only console to pick from was the Atari 2600, and most of the time we would make good use of our imagination as opposed to forming suggestions for other people’s imaginations like today. Still, Augmented Reality (AR) is an area that is fast expanding into everyday life like vacuum cleaners, so it is not surprising at all that AR will also target children and their toys. NeoBear is all set to release the AR Globe, an AR toy for the little ones some time later this month.

With a compatible mobile device like a smartphone or a tablet, your little ones can check out different aspects of the planet on the AR Globe, where among them include territories, buildings, animals and natural disasters for every single listed country around the world. All of this without having to go through the complexities of Google search results, as they learn to bridge the gap between reality and virtual reality.

Not only that, the younger minds can experience what goes on in the broader solar system, including the revolutions of the eight planets. Traditional globes tend to be defined as scientific and educational tools, but the AR Globe makes sure that the way children perceive the world will be a whole lot more interesting, of course.

This high-tech multi-purpose globe will subvert the cognitive pattern of traditional globes so that young learners can easily master mass knowledge of astronomy and geography. The use of AR interaction, 3D animation, human voice narration makes up an all-dimensional multi-sensory interactive learning experience, facilitating mental development of children at a growth stage. We do look forward to NeoBear fixing the final sticker price sooner rather than later.