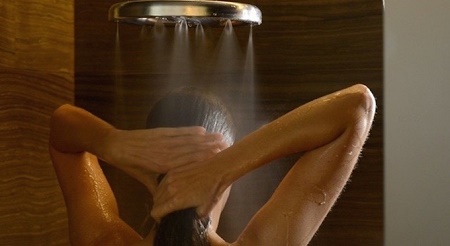 Showering is something we all do on a regular basis (I hope). It’s essential to making sure you are clean, refreshed, and capable of venturing out into public. While a shower head is something so commonplace that few of us would ever stop to think of how it could be improved, several innovators at Nebia have proven us wrong in our assumption that we couldn’t go farther with that technology.

Carlos Gomez Andonaegui was an owner of a fitness company that used a large amount of water for their showers and wanted to approach shower heads with a new frame of mind that was both evironmental and economically friendly. That’s where Nebia comes in. The Nebia uses nozzle technology that was innovated for the medical and rocket science fields, and atomizes water into millions of tiny droplets, which can allow them to cover 10x the area of a normal showerhead while only using a small portion of the water necessitated by the latter. Because of the expansion of the area that the water can cover, it can transfer 13 times more heat into the water and the surrounding air. In addition, Nebia took the time to measure out the exact amount of water used by the average shower-taker, and found that their shower head only used 6 gallons for every 20 consumed by all current competitors.

Nebia can be easily installed at home with an included kit, and is adjustable on a bracket that can be moved up to 27″. It can also be used with a detachable wand. The company took to kickstarter to fund their project, and were met with overwhelming success; their project is over 2500% funded with 15 days left to go. You can still pick up your own on the site for only $299, $100 less than the planned retail price. The inventory is expected to ship in May 2016.