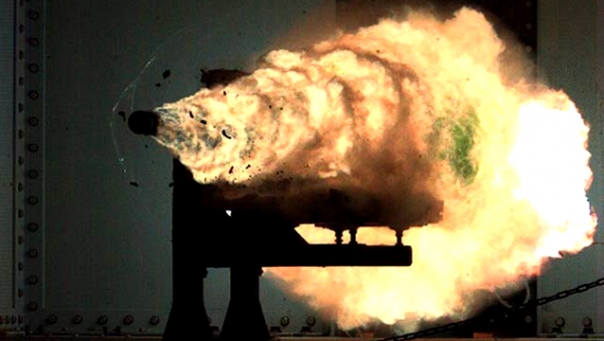 Some of you might remember when we covered that portable coilgun that uses electromagnets to fire a projectile. This one railgun by the Navy can also fire projectiles, at an out-of-the-barrel speed of Mach 7 (approximately 5,000 miles per hour).

A railgun is powered by electricity, and accelerates a conductive projectile along a pair of metal rails. The current interacts with the magnetic fields generated by the rails and this speeds the projectile on its very fast way.

In case you are wondering, these projectiles have to be specially made in order to prevent them from melting from the air friction. By the way, it takes 33 Megajoules of energy to fire this gun.

Some of you might be familiar with the term railgun from Transformers 2: Revenge of the Fallen. It is a scene when actor Jon Turturro contacts a Navy ship to use its railgun to destroy a very giant Decepticon. As I recall, the person on the other end of the line said that the weapon of mass destruction was classified technology.

I’m sure that the railgun in the film was a CG creation, but this aforementioned real-life railgun is planned to shoot targets from a distance of 100 miles away. Yes, that is pretty far, and is probably cheaper than a missile.

As much as I think this is a cool weapon, I am not looking forward to days of railgun warfare.