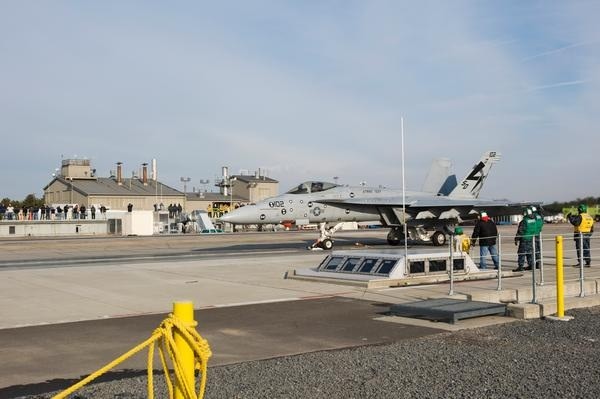 We talked about a Navy Railgun that can shoot projectiles at Mach 7, and the Navy has another use for a railgun: launching a fighter plane.

Navy’s Electromagnetic Aircraft Launch System (EMALS) is finding a way to improve shooting a jet fighter from a carrier that could replace the steam catapult which has been used for the past 50 years.

The EMALS was used on a test-bed at Lakehurst, New Jersey on an F/A-18 Super Hornet. I have a video of it after the jump if you want to see it fly, Top Gun style.

The railgun is electrical, using two conductive rails instead of the steam that takes a while to “recharge”. Not only can the railgun system launch more planes in less time, but it is also more energy-efficient. The EMALS can also launch different sizes of aircraft from lightweight unmanned aircraft to large and heavy fighters. I’m sure this would have been a big help in the Doolittle raid, as shown in Pearl Harbor.

Hopefully, this electric railgun catapult system will be used on the U.S.S. Gerald R. Ford, a soon-to-be built aircraft carrier. Unless the shipbuilders can meet a certain deadline by May 2011, it might have to stick with the old-fashioned steam.