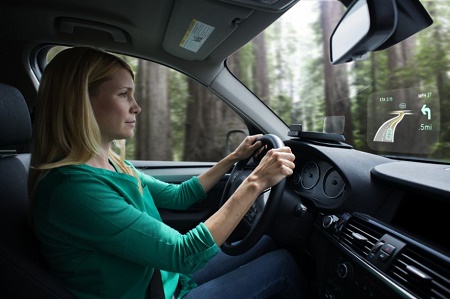 The biggest threat to our safety when we drive, is our own willpower. We want to be the epitome of safe driving, but we still answer phone calls, fumble around for our phones when we need directions, and think we’re being sneaky by texting at a stop light. The problem with paying attention to our phones when we know we shouldn’t be, is that we’re not focusing on the road. Seeing that lots of things can go wrong very quickly when you’re driving a one-ton death machine, it’s best that we abstain from reckless behavior.

They have made heads-up displays for GPS, but now there’s the Navdy. This is a dashboard-mounted projector with a 5.1″ transparent display that will sit directly in front of the driver’s side. It has an accelerator, an e-compass, and an ambient light sensor so it doesn’t blast your vision at night. There’s an internal speaker so you can take calls, as well as a microphone with noise-cancelling DSP. It has a dual core processor that’s running on Android 4.4, but will work with iOS and Android devices alike.

If you are using your Navdy as a GPS, and a notification for a call or text comes in, it will simply scrunch the map to one side, so you don’t need to worry about your map disappearing. To answer calls or texts, you can speak or use hand gestures, which means you don’t have to worry about pressing any buttons on a screen or taking your hands too far from the wheel. While there’s a specific app that works with Navdy, there are some apps it will play nicely with. For example, this can control your music through apps like Pandora, Spotify, or iTunes. This is currently available for pre-order at the price of $299.

Available for pre-order on Navdy