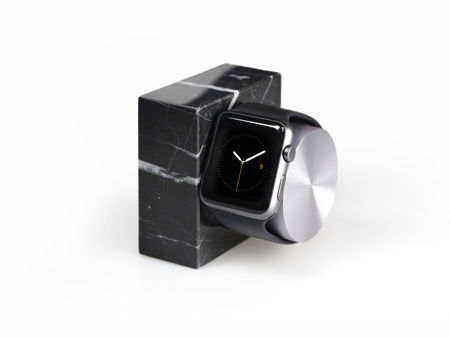 The Apple Watch is a smartwatch that has certainly captured the imagination of many a user, although it has not changed the way smartwatches work in the same way the iPhone revolutionized the smartphone industry. Still, this does not mean that the Apple Watch is a pushover – it is certainly worth drooling over, and hence, just like any other carefully designed Apple product, you might want to get thoughtfully manufactured accessories to go along with it. Native Union has just unveiled their DOCK for Apple Watch Marble Edition. As its name implies, this has been crafted from the finest solid marble, making DOCK is a beautiful design object for the home as well as a versatile base for charging your watch.

Since it has been crafted from a piece of marble, you can bet your bottom dollar that it is heavy – no kidding! I suppose that would allow it to double up as a paperweight as well. The DOCK will boast of a brushed metal rotating arm which can be comfortably used as well as to navigate the watch face as you charge. Anyone who lays their eyes on it is almost certain to wake up the green eyed monster within, as the unique and intricate veins of the natural marble ensures that no two pieces are alike but rather, one-of-a-kind.

DOCK’s rotating arm functions along a sophisticated gearing system, allowing you to smoothly and firmly control the angle of your watch in order for you to check your messages and make use of apps in comfort as the Apple Watch is being recharged. Precision engineered without the need for any screws, DOCK’s pair of minimal components will slot together magnetically. The Apple Watch’s magnetic charging cable will be fed into the dock where it is locked in place, hence ensuring messy wires remain out of sight as well. Regardless of whether the Apple Watch is buckled or unbuckled, it will be held in place magnetically via DOCK.

You can use the DOCK horizontally as well as vertically, and when coupled with Nightstand Mode, it will make the transformation into the perfect bedside alarm clock. The design is reversible as well, so that you can position the arm on the side which is most convenient to you. You can pick the DOCK in white or black genuine solid marble for $119 apiece.