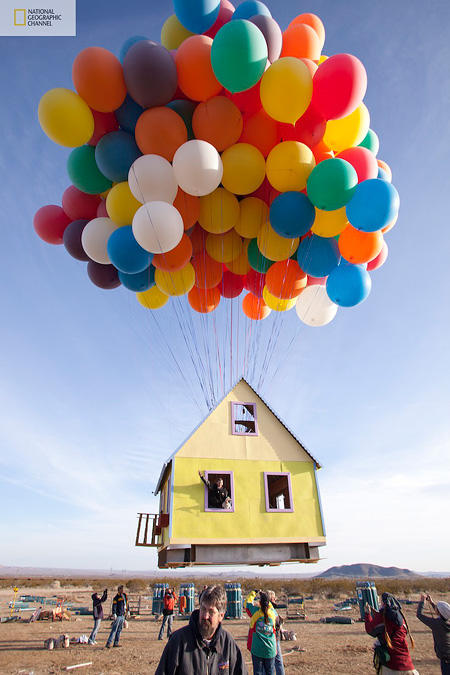 One of the problems I had with the movie Up from Disney/Pixar was that I had to completely suspend my disbelief for the basic premise. Don’t get me wrong, I think it is one of the best films the studio has put out, but I’ve heard that it takes significantly more balloons to lift a house than the ones that Pixar’s animators put in.
Still, it is rather neat, isn’t it? A show produced by National Geographic known as How Hard Can It Be? shows how hard it is to make a house fly.
You can watch the Good Morning America video after the jump to see the house, and it is definitely modeled to look like the house from the film. As for the balloons, it uses weather balloons instead of carnival ones. These balloons are about the size of a person and take an entire helium tank just to fill.
The entire structure with the balloons is about 10 stories high, and it manged to reach a level of 10,000 feet for about one hour. I don’t have any word of how they got the house to come down. Maybe they had some guy with a key inside who slowly cut away some balloons.
The National Geographic show that will feature this floating house will premiere some time in the Fall of 2011. In all honesty, I’m surprised the boys at Mythbusters didn’t do this first.