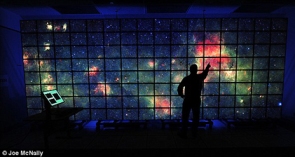 Imagine if you had a display like this. Yeah, I would probably put this view of space on it too, just to remind me of how small I am, I guess.

Of course, it is required that you be watching the galaxy on it, as this is the property of NASA. This Hyperwall has 128-screens (16 x 8), which comes out to about a quarter of a billion pixels. In case you are wondering, it has a 23 foot diagonal.

You can watch a video of it after the jump, and you can see a time-lapse film of the people at NASA working on it. I can’t help but wonder what they are thinking as they are pointing to certain things on it. Are they looking at other galaxies? Planets? An asteroid that is about to strike Earth and extinguish life as we know it?

I also can’t help but wonder where they get the images from. Are they live feed from satellites?

I’m guessing that the workers of NASA probably wouldn’t use this Hyperwall to watch a checkered version of Avatar on their lunchbreak, as that would be a waste of 1,024 processor cores. It also runs of speeds of up to 74 teraflops, which is about 74 trillion calculations per second, about the equivalent of 300 PS3 consoles.