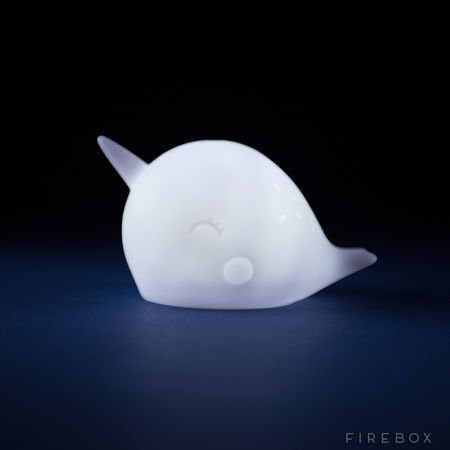 While we might be familiar with the more famous sea creatures around such as sharks, dolphins, and whales, there are some other creatures which are stranger than usual – including the unicorn of the sea, or the narwhal. It is somewhat like a seal or sea lion but with a solitary horn, making it look as though it is magical or something in the same vein, but in reality, it is just another mammal that loves to make its home underwater and surfacing from time to time to enjoy the fresh air. Well, now you can prevent things from going bump in the night (and to stop another incident of you stubbing your toe against the corner of the drawers) thanks to the £9.99 Nari the Narwhal Night Light which arrives in pink, purple and white options.

This is one night light that will certainly be different from the rest, and not only that, it is also adorable to look at, too! It emits a bright yet soothing glow from its bulbous physique, and will come with a new one hour turn-off feature in order for it to save energy in the long run. Not only that, it will be powered by batteries, and not seafood, so you need not end up smelling like fish at the end of the day. Best to make use of rechargeable batteries in the long run then.