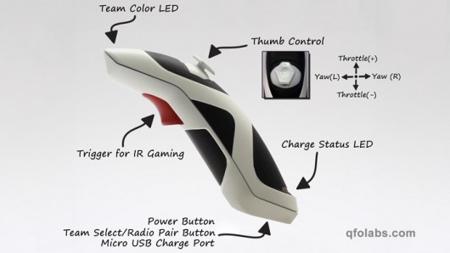 Do you love all things remote controlled? If you have answered in the affirmative, then we are pleased to bring you word that QFO Labs, a startup which hails from Minneapolis, has just announced that they will be rolling out a mini quadcopter toy that they have dubbed the NanoQ. It will rely on relatively affordable 3-axis gyros and accelerometers, in order to help it remain nice and stable in mid-flight. Apart from that, it will be accompanied by a one-handed remote which integrates tilt sensors for smooth and natural control. It is different from most of the other quadrotors in the market however, as the NanoQ’s propellers will come in an inverted manner which prevents them from colliding with ceilings. This is a good thing, especially if you have your home’s ceiling fan turned on.
Just what kind of dimensions does the NanoQ come in? Well, for starters, it measures a mere 5.25” across while tipping the scales at a diminutive 35 grams with a maximum payload of 10 grams. Having said that, it is capable of remaining up in the air for up to ten minutes on its rechargeable LiPo (that’s lithium polymer for you) batteries, with a controlling range of up to a hundred feet (30 meters). The company hopes that the future will see multiple NanoQs competing at flying laser tag, since they are capable of “shooting” one another using onboard infrared (IR) sensors.
The NanoQ does seem to carry far more potential than just being a toy, and courtesy of its relatively low planned price of $149 a pop with its PC compatibility, it could double up as a research platform for university labs that are running on a tight budget. Whenever you hook up the controller to a PC via USB or a USB RF dongle, you are able to send it commands while accessing its sensor data and more.
Source