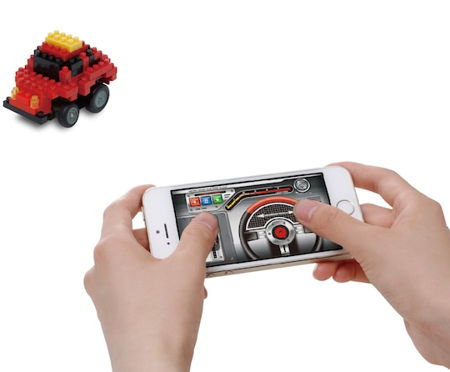 I am quite sure that you would have gotten sick and tired of hearing the well worn statement, “There’s an app for that” by now. Well, the modern day smartphone is truly a wonder to behold, as it is not only a communications tool that helps you keep in touch with those who are near and far away at a fraction of a cost compared to the olden days, it also has so much more potential – including being able to double up as a remote control in certain cases. Most definitely with the $56 Nanoblock Motion Choro-Q First Generation, of course, which in essence, is a mini toy car.

The Nanoblock Motion Choro-Q First Generation is a merger of two of Japan’s most popular toy series – namely the much loved mini building blocks from Kawada and Takara Tomy pullback toy cars. Just like any other Nanoblock toys, the Choro-Q is all about customization, since it comes with a chassis and has several Nanoblocks to help you get started right out of the box, with the option to add even more Nanoblock from your own collection down the road. Apart from that, there is a free Android or iPhone app that you can download, allowing you to control it for a full minute – on a full charge, of course. To increase the level of realism, the phone app will even come with relevant engine noises, now how about that?