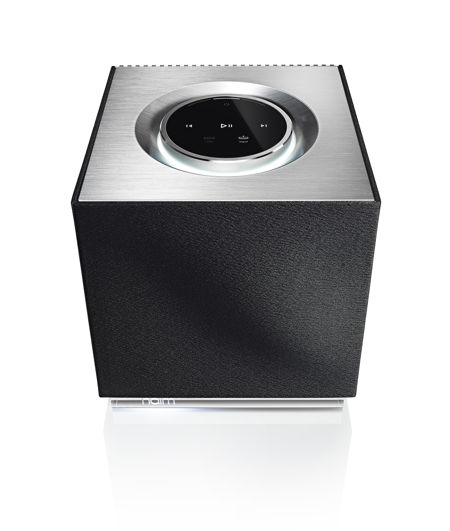 It was in October last year that we saw the arrival of the Mu-so from Naim receiving TIDAL support, and hence, it is rather surprising that not too long since then, an apparently better version of the Mu-so has arrived, where it will be known as the Naim Mu-so Qb. The Mu-so Qb has been designed to assist users to create a deeper and more intense connection between artist and listener, thanks to its sophisticated design as well as high-quality sound profile. For starters, the Mu-so Qb does not forget its roots, which is why it shares a similar design DNA as that of the Mu-so, boasting of an intuitively crafted form factor into a truly compact cabinet, making it ideal for any living space. The Mu-so Qb comes alive visually with contours and features, but do not be fooled by its relatively small form factor as it packs 300 watts of power, which means that the small size is not an issue.

The Mu-so Qb wireless system managed to see individual speakers configured within the smaller cabinet, and this was made possible thanks to the use of tweeters with microfiber domes, mid-range drivers that boast of rare earth magnets and copper-capped poles that deliver an even greater level of accuracy. The Mu-so Qb also makes use of a couple of pistonic bass radiators to have them work alongside a custom-made woofer, which are then driven by a 100W amplifier in order to create a depth of sound that most would never expect from a system this size. There is also a touchscreen interface located on the top of Mu-so Qb within a solid aluminium ring, and when illuminated, it looks as though it floats above the core structure to compliment the seamless volume dial movement.

It is a snap to hook up the Naim Mu-so Qb to a home Wi-Fi network as you can then wirelessly stream downloaded music in high-resolution via UPnP or browse and play millions of songs through Spotify Connect, TIDAL, Internet Radio or Airplay. Connectivity options include high quality Bluetooth (aptX), while there is also a USB input for charging and playback of mobile devices, a 3.5mm analog input and a digital input. Expect the Mu-so Qb wireless system to arrive in shades of Burnt Orange, Vibrant Red, and Deep Blue for $999.95 a pop.