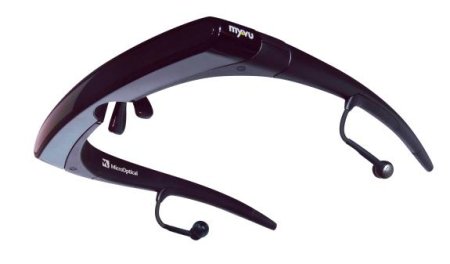 How many of you out there use video eyewear to view your favorite movie in a compressed format? I think it is pretty useful especially when you’re on a plane and would just want to shut the world out while being tricked into thinking that you’re sitting in your very own flying theater (or on the ground if you happen to take a long road trip through rail and asphalt). Not only that, you can always watch naughty videos without having other people catching you doing it. The downside would be being unable to see what’s going on around you, but that’s no biggie when you’re on a long haul flight, right? Myvu Corporation has long released a line a video eyewear that have improved over the years, and their latest addition to an ever growing family would be the Crystal EV which debuted at InMotion Entertainment airport stores nationwide.

The Crystal EV, being the latest release from Myvu, would naturally come with upgraded technology to make it stand above the shoulders of its predecessors. Improvements over the original Myvu Crystal include the addition of Myvu’s SolidOptix technology, bringing a 64″ equivalent screen size right in front of your eyes, which is a vast 30% increase over the original Crystal. In addition, you don’t have to worry about incompatibility problems concerning Apple products and the Crystal EV since Myvu is the only video eyewear company to achieve Apple iPhone Certification and Nokia Forum status.

There is no word on just how much the Myvu Crystal EV will cost, but it sure sounds cool enough to wear for long hours on end without suffering from pains or aches. What you see above is a past Myvu product, and we are pretty sure that Myvu will continue to retain the sleek lines and design that made them so attractive in the first place.