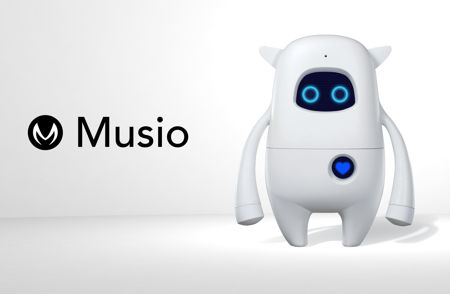 Modern day technology has seen the path of new toys being transformed into highly interactive robots, although one of my fondest memories of such a toy robot would be the Sony Aibo. The Aibo was an adorable dog robot, but it surely had its limitations, not to mention ridiculous price tag that put it out of reach of many. Here is an AI social robot known as Musio, which is extremely cute to look at thanks to its Japanese design roots. What is more important is the fact that Musio is a robot friend that takes the time and effort to understand and remember conversations through all the various interaction with different users — which is more than what I can vouch for when communicating with certain humans.

AKA LLC is the developer of the world’s first artificially intelligent social robot, the Musio, and Musio will be based on AKA’s AI engine ‘MUSE’. This communication robot is capable of interacting socially with all people regardless of their age, where it will be assisted by NLP (Natural Language Processing), Vision, and AKA’s rich interactive content ecosystem. In other words, Musio fits the bill perfectly when it comes to address the world’s growing demand for a robot companion.

Raymond Jung, CEO of AKA LLC, shared, “AKA’s next step is with Europe’s traditional hardware companies seeking innovation. By presenting Musio the robot, AKA is introducing its core technology, MUSE, to our future partners. We believe that our AI engine will present immeasurable opportunity to those calling out for ‘AI Plus’ for the upcoming industrial revolution.”

Musio was launched in Japan earlier this year, making it the top selling social robot in that part of the world. The English conversation feature made it quite a hit, having been configured via MUSE’s context-aware deep-learning algorithm. It can remember dialogue in the past with users, and is also context aware, allowing a natural flow of conversation quite unlike smart speakers in the vein of Google Home and Amazon Alexa. Definitely something that I would love to see end up under the Christmas tree this year!