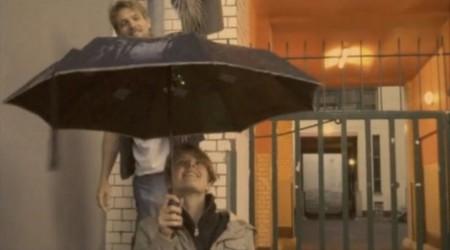 An umbrella is supposed to keep you dry from those rainy days, and it too, would be able to ensure your skin does not get sun burnt at all when it is scorching hot out there during the summer. At this year’s Amsterdam-based Music Hack Day, a couple of intrepid hackers who hail from Berlin did figure out a way to create a musical umbrella which is capable of producing a random series of lo-fi 8-bit tones.
These tones are triggered the moment a raindrop strikes the outer surface of the umbrella’s canopy, and since the results are totally random and abstract, you will hear different tunes all the time, and chances are just like snowflakes, you will not find the same two tunes at any time. What your ears will hear would be something akin to what the first generation Nintendo Game Boy is capable of churning out. To know more about how this particular musical umbrella works, read on after the jump.

The gist of the umbrella works this way – whenever raindrops strike the outside surface of the umbrella canopy, they will be transformed to tones thanks to the presence of a dozen piezo pickup sensors which are taped to the underside of the umbrella. These piezo pickup sensors are fully capable of responding to vibration, where they are then sent over to an Arduino Uno, which is actually a cheap and open source micro-controller that is popular with hackers and hobbyists. Not only that, it will in turn be hooked to a couple of speakers.
The Music Hack Day event was originally held in the London offices of U.K. newspaper The Guardian three years ago, and the movement has since spread to Berlin, Amsterdam, Boston, Stockholm, San Francisco, Barcelona, New York and Montreal, where over two thousand participants and sponsorship from notable music-tech companies are the attendees.
There is still no indication that this musical umbrella will be sold to the masses, but the umbrella’s creators, Alice Zappe and Julia Lager, decided to come up with a new and improved version of their Music Hack Day prototype.
Source