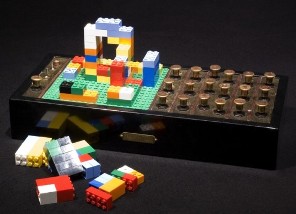 I’ve never heard of the phrase “steampunk musician” before I wrote this post, but Yoshi Akai apparently is one. He wrote a master’s thesis on turning color into sound, and he has invented a way of turning Lego into music.

This Lego Sequencer MR II, which uses the famous brick to make different sound combinations. You can watch a video of this Lego instrument in action, and I’m not certain why the other half of this device looks this way.

Apparently, putting the bricks in certain places, along with certain colors of bricks alters the sound. In fact, you can make all sorts of combinations in stacks of bricks for all kinds of rhythms. It reminds me of one of those Casio keyboards back in the eighties, but instead of buttons, you have to connect Lego bricks together.

I don’t know if this is one instrument that I would play, but I really think that Lego needs to adopt this on their catalog. This would be bigger than when they started making Lego Star Wars toys. Okay, maybe not that big.

Still, it would be an instrument that I could play. Perhaps I could be a steampunk musician. Maybe I’ll just stick to the Beamz Interactive.