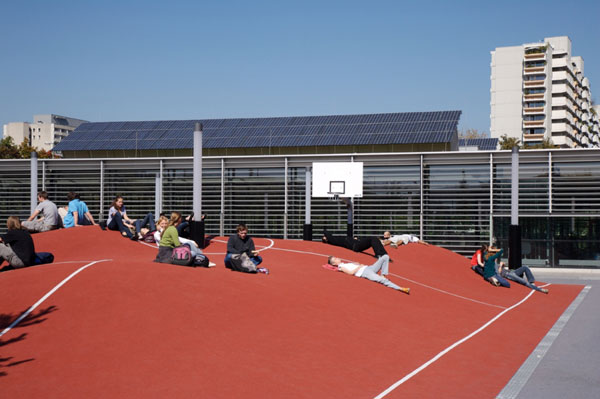 Just so you know, you are seeing a basketball court, but this one is in 3D. As you have probably figured out, it is not NBA regulation.
It is a regulation size, but some designer apparently had a lot of fun morphing it into a blob shape. If you want to see it for yourself, this orange-red tartan covered court is in Munich.
My Source doesn’t seem to have any images of people actually playing B-ball on it, and I can imagine why. Can you imagine dribbling on a court like this one? All it would take is one bounce in the sloped areas, and that ball would fly out of bounds faster than you can say: “Michael Jordan”. Too bad the humps by the baskets aren’t larger, or players could do some serious slam dunks.
Players might have a hard time avoiding those poles in the court, too. Just to let you know, those are lamps that illuminate at night. Putting one in the center is just plain bad layout if one wishes to use these for sport, which is why I am guessing that the designer just wanted to try something quirky. That, or he wanted to create something for skateboarders or rollerbladers.
Source