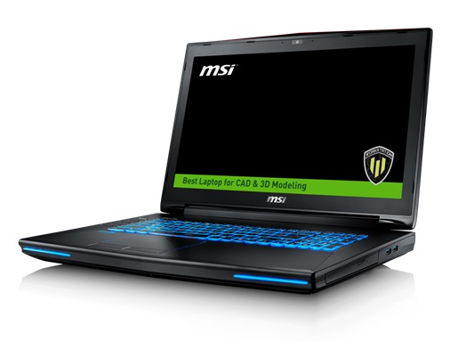 MSI is an old hand when it comes to gaming notebooks as well as mobile workstations, having rolled out a fair number of such devices over the years. Well, it looks like there is yet another model that will achieve the tag of the “world’s first” this time around, where it would be known as the MSI WT72. What makes the MSI WT72 so special? For starters, it happens to be the first NVIDIA VR ready mobile workstation that boasts of the Quadro M5500 chipset, which is NVIDIA’s latest mobile GPU.

Specially designed to cater for maximum performance, MSI’s WT72 will come powered by NVIDIA’s Quadro M5500 GPU, in addition to Intel’s 6th generation Core-i7 and Xeon processors, and carry up to 64GB of DDR4 memory. This is the latest model in professional graphics design technology, where the Quadro M5500 happens to be the world’s fastest mobile GPU, as it can deliver up to 35% performance increase over previous models, with 2,048 cores for optimum speed and power.

With NVIDIA’s M5500 Quadro GPU powering the WT72, the world’s first VR Ready mobile workstation is more than capable of blazing through the most demanding tasks. It might even be the signal of a brand new VR revolution that will jump headlong into a new dimension. To make sure that you know what kind of capability the MSI WT72 has, it is Autodesk VRED certified and compatible with existing VR systems, including Oculus Rift and HTC Vive.

Not only that, the audiophile-grade Dynaudio speakers that boast of Nahimic Audio enhancer will be thrown into the mix, in addition to True Color Technology screens with Adobe RGB certification for wide viewing angles and the most accurate visuals, and the new SteelSeries backlit keyboard with Silver-Lining Print to eliminate eye strain. There will be Thunderbolt 3 and USB 3.1 connectors as well, and it sports a dual fan design for efficient heat dissipation. Any takers?