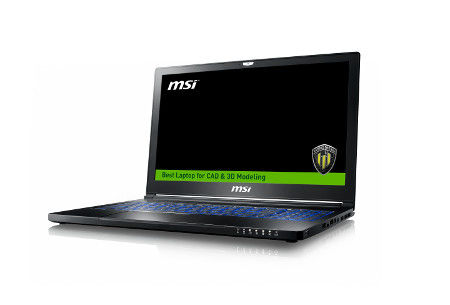 MSI knows that it cannot simply stand still and let the world go by, this is the surefire path to obsolescence. This is also the main reason as to why they have decided to give the MSI WS63 workstation an update, cramming into it the NVIDIA Quadro P4000 graphics chipset to deliver superior mobile performance, regardless of where you are at that point in time.

The updated MSI WS63 which is powered by the Quadro P4000 with Max-Q Design brings with it a slew of benefits. Sporting a smaller design, it also delivers improved graphics performance as well as boasts of an optimized air flow system, allowing MSI to redefine the term ‘portable workstation performance’.

Using NVIDIA’s Pascal architecture, the Quadro P4000 GPU is touted to be able to offer more than 40% the visualization performance and 1.7 times the computing performance compared to its predecessor. With the MSI WS63 boasting of the performance capability and memory capacity that large workstation models have, it is able to churn out photo-realistic renderings and a compelling VR experience without missing a beat, all arriving in a thin and light mobile workstation chassis.

Hardware specifications of the MSI WS63 include 8GB of GDDR5 memory in the Quadro P4000 GPU, 32GB of RAM, NVIDIA GPU Boost 3.0, five pipes for optimized thermal design, a 41-blade fan for the CPU, built-in biometrics and high-level security for enterprise-grade security, which have been certified by Windows Hello, a 15.6” display that arrives in either Full HD or 4K IPS options. In terms of storage, you can pick from either a 512MB SSD + 2TB HDD or a 256MB M.2 SATA + 1TB HDD, depending on your budget and needs, all powered by a 7th generation Intel Core i7 processor. The starting price stands at $3,099 apiece.