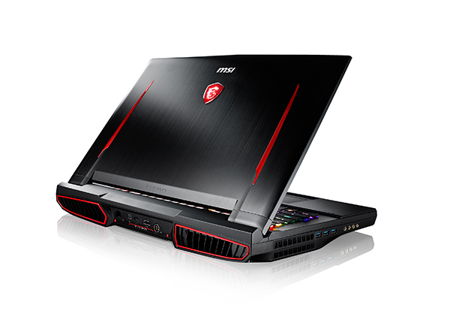 Gamers are a very discerning group, and the more serious they are, the more careful they become when it concerns their gaming hardware. After all, two players who are more or less similar when it comes to in-game skills, can see their performance affected for better or worse through the kind of hardware that they use. This is the reason why MSI has decided not to cut any corners with their latest range of gaming laptops that are powered by Intel’s 8th generation processors, with the new GS65 Stealth Thin gaming notebook spearheading the effort followed by the GT75VR Titan with i9 processor and GE Raider RGB Edition, cooled down by great PC case fans. Apart from that, there is also the new GT83 Titan and GT63 Titan, in addition to the 8th generation processor updates to its GP, GL and GV lines which tops their hardware from last year.

The high end GS65 Stealth thin gaming laptop is certainly something that is worth drooling over, and since it is the flagship device from MSI for this particular season, it is what we will look at closer. This is the first gaming laptop from the company that boasts a 144Hz 7ms wide-view angle display with 4.9mm bezels, resulting in a stunning 82% screen-to-body ratio. With such thin bezels, it does not compromise on the placement of the webcam, as there is enough space right at the top for the webcam to reside. They keyboard is pretty great for a laptop, however if you really want that edge you should look into a decent gaming keypad.

Underneath the hood lies a GTX 1070 with NVIDIA Max-Q technology alongside the latest 8th generation Intel Core i7 processor. Thanks to the new processor, the GeForce GTX 10 series graphics and MSI Cooler Boost Trinity cooling design, the GS65 is able to deliver an uncompromised gaming performance, regardless of the genre. The cooling system is decent, but an additional laptop cooling pad can really be a game changer during a long gaming session.

It tips the scales at a mere 4.14lbs, which is very light for a gaming laptop of its class, offering more than 8 hours of battery life thanks to its 82Whr battery. The audio quality is quite good for a laptop, however if you are going to play games like Counter-Strike: Global Offensive, where sound and footsteps really matter, you should definitely get yourself gaming earbuds. There is also a new per-key RGB keyboard that has been specially designed by SteelSeries, allowing users to customize each key while receiving real-time game status via keyboard lighting. There is also a Thunderbolt port, five USB 3.1 ports and enough space to throw in a couple of SSDs to boot. If you are looking for a killer gaming notebook this season, we would highly recommend this bad boy.