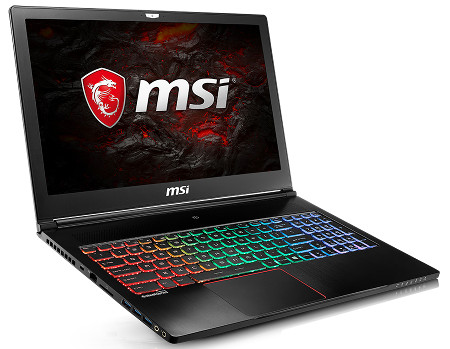 MSI is no stranger when it comes to gaming notebooks, which is why it is interesting to note that the Taiwanese company had continued to work on its range of gaming hardawre with a slew of new products that took the bow at Computex 2017. It has certainly refreshed its gaming laptop roster, which will now include the GT75VR, GS63/73VR and GE63/73VR series which we will take a closer look at right after the jump.

The MSI GT75VR will now arrive in an all-new design complete with an RGB mechanical keyboard, where this is one laptop that will usher in a whole new era of ultimate gaming. This is the high end model from MSI, and depending on your budget and gaming needs, it will arrive in a choice of three GPU options: the GeForce GTX 1080, GeForce GTX 1070 SLI, or GeForce GTX 1070. Mobile gamers can then enjoy near-desktop performance, in addition to an Intel CoreTM i7 7820HK CPU with over 4GHz overclocking capability. It also boasts of the SteelSeries rapid RGB mechanical with customizable Per-Key RGB illumination as well as a diamond-shaped palm rest.

As for the MSI GS63/73VR, this is touted to be the world’s slimmest gaming notebook with GTX 1070 graphics and 120Hz/3ms display. Just how slim is it? For instance, it measures all of just 17.7mm at its thickest point, tipping the scales at a mere 4.19lbs, which makes it highly convenient to bring about with you wherever you go. The GS63VR will also boast of an ultra slim chasis, and this lightweight 15-inch gaming laptop would also feature a GeForce GTX 1070 graphics as well as the world’s fastest 120Hz/3ms display with vivid HDR color range. You can be sure that your gaming experience on this bad boy will be a stellar one for sure!

Last but not least, the MSI GE63/73VR Raider is touted to be a game changer, where its design has been inspired by exotic sports cars. It will feature a greater degree of angular appeals, and will arrive in 15-inch and 17-inch models. In fact, the GE63/73 VR Raider will take advantage of GeForce GTX 1070 graphics as well as feature an overclocking ability. It’s new weapon? A HDR-compatible, 120Hz panel with ultra-fast 3ms response time.

Now which of the following gaming notebooks suit your taste?