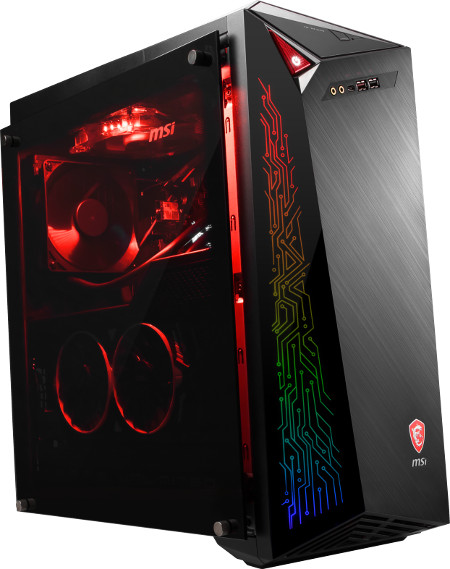 Anyone who is serious about gaming would definitely know that having the right kind of hardware is extremely important to get as much of an advantage as possible over the other opponents. Some of us might want to start building a gaming rig right from scratch, while others could look to picking up a gaming desktop that has already been pre-configured. MSI caters to the latter group today with the announcement of the Infinite X gaming desktop that will deliver the power of an Intel Coffee Lake i7 processor alongside an NVIDIA GTX 1080Ti graphics card, while making sure this high performance rig runs nice and cool at all times courtesy of a new liquid cooling system.

This will definitely be a step up from the MSI Infinite gaming desktop which was revealed earlier this year, and the inspiration behind the Infinite X would be a non-stop desire to game and for gamers who would like to have virtually endless possibilities to game in the style of their choice. You should be able to obtain one of the better gaming performances with the Infinite X, while the latest unlocked processor from Intel delivers the right kind of speed and performance that gamers require, including the ability to overclock. Regarding sounds and audio quality we recommend getting a good pair of gaming earbuds, as those can really upgrade your experience, even if you go for a budget choice.

MSI’s exclusive Silent Storm Cooling 3 PRO thermal design will ensure nothing gets overheated, and with plenty of room for upgrades, the obsolescence monster will continue to remain in the rear view mirror. Boasting of two 3.5” HDD and a trio of 2.5” SSD/HDD bays, the Infinite X supports up to 64GB of RAM while the graphics card remains mounted vertically for safe transportation and optimized airflow in a small case. On the exterior lies MSI accents such as a tempered glass side panel (a classic black side panel is also available) and RGB Mystic Light in order for gamers to customize their desktop.

Expect to pick up the MSI Infinite X gaming desktop from $1,699.99 onwards.