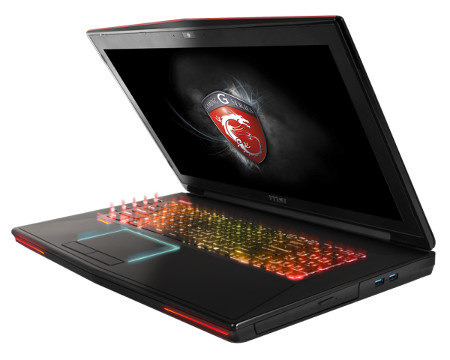 MSI Computer Corp. has just revealed their latest gaming notebook (after rolling out a fair number of them in the past, with the likes of MSI GS70 Stealth Pro among others) that comes in the form of the MSI GT72 Dominator Pro, touting it to be the latest icon when it comes to mobile gaming notebooks. Specially designed for the mobile gamer who intends to enjoy gaming prowess as well as unmatched gaming experience regardless of where they are, the MSI GT72 Dominator Pro gaming notebook will be armed to the teeth where the gaming compinents are concerned.

For starters, the MSI GT72 Dominator Pro boasts of a completely redesigned chassis that measures less than 2” in terms of thickness, which is also close to 0.5” thinner than its closest competitor and lighter than most desktop replacement notebooks. It obtained its inspiration from high-performance exotic cars, where the gaming notebook itself is fused from a one-piece aluminum chassis that has customizable lighting effects to deliver superb aesthetic pleasure.

Apart from that, MSI’s GT72 Dominator Pro will also make use of a frameless pseudo-glass palm rest that delivers superior comfort, while an enlarged seamless track pad paves the way for easy scrolling, as it comes equipped with quick launch keys that includes a one-touch stream sharing button via XSplit Gamecaster so that gamers will have easy access should they need to perform an upgrade when it comes to storage and memory.

There is also an improvement made to the cooling system not to mention the overall airflow, as the updated thermal design will now boast of a dual fan cooling solution alongside technology used in MSI Twin Frozr video cards which aretouted to significantly improve system stability and performance without causing a racket.

It even boasts of having up to 4x M.2 SSDs in RAID 0, where MSI’s unique Super RAID 3 technology paves the way for 1600MB/s of reading performance, which is 15x faster compared to a traditional 7200RPM hard drive. It also is the first gaming notebook that comes with Killer DoubleShot Pro, a technology that merges both Killer E2200 Game Networking and Killer N1525 Wireless-AC in order to deliver the fastest data transfer speeds available worldwide. Bye bye, lag!

Their partnership with SteelSeries will see them develop a keyboard that has brighter backlight LEDs, a frameless design which offers a solid and tactile feedback, a large 17.3-inch Full HD Anti-Reflective screen, NVIDIA GeForce GTX 880M, MSI’s Audio Boost 2 technology, and Dynaudio speakers & subwoofer. The asking price is not cheap though – we are looking at a whopping $2,599.99 onward.