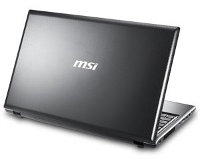 MSI, the Taiwanese computer manufacturer, has done its bit this time around to introduce another notebook which aims to bring a balance between performance and entertainment with their latest MSI FX600 notebook. This 15.6″ machine will target folks who want nothing but the best in entertainment and productivity, of course, when they call it the “best” in their books, do take that with a pinch of salt since you won’t be able to eke out high end audio performance for example, despite it sounding above average when compared to other different notebooks. Thanks to the powerful Intel Core i5 processor running from within which is complemented by MSI’s own Turbo Drive Engine (TDE) technology, one will be able to enjoy a powerful multimedia experience that is also supported by collaboration with internationally renowned sound system expert THX.

When it comes to graphical performance, you won’t find the FX600 short of breath. After all, it comes equipped with MSI’s very own GPU Boost technology alongside a high-end NVIDIA GeForce GT 325M discrete graphics card that has 1GB of display memory. The FX600 is capable of automatically switching between the integrated and discrete GeForce GPU as and when required, making sure you get maximum battery life without compromising on performance, ensuring you will be able to enjoy superior sound and visuals the way MSI intends you to.

Apart from Intel’s Core i5 processor, the Intel Turbo Boost and Intel Hyper-Threading technology will be able to let the notebook handle more data in a much more efficient manner. As mentioned, theater-grade THX smart surround sound has also been integrated for that realistic movie going experience, alongside Smart Volume and Surround technology for crisp, clean sound for music and movies. With MSI’s own Turbo Drive Engine technology, the FX600 can throttle up performance on-the-fly with a single touch of the hotkey. A nice touch is the built-in HD Webcam that offers clear and smooth video and picture quality alongside exceptional audio effects in 720p resolution. Expect to fork out $899.99 for the MSI FX600.