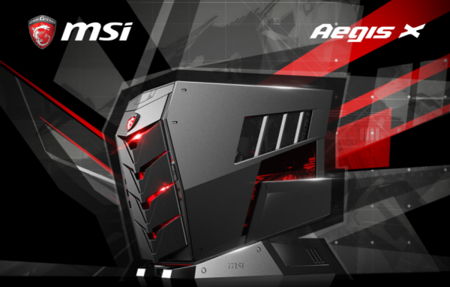 The folks over at MSI are no shrinking violets when it comes to gaming PCs, and this time around, they have decided to lift the veil on what they deem to be the fiercest mobile gaming barebone PC series in the world – the MSI Aegis as well as the Aegis X. Both of these are touted to be the world’s first compact gaming barebone PC series that are full well capable of delivering full-sized performance even while one is on the move.

MSI’s Aegis will come with a proprietary B150 motherboard and CPU Cooler that can support an Intel 6th Gen processor, whereas the AEGIS X will be equipped with a Z170 motherboard that is capable of handling an Intel K-series processor. In order to ensure that performance boundaries will break into new stratospheres, the flagship AEGIS X will also boast of a Dragon OC button, which boosts speed by 15% with one touch. Sounds pretty much like one of those old school computers that come with a “Turbo” button, don’t you think so?

Specially designed for gamers who are looking to maximize space as well as power, the two AEGIS gaming barebone models feature an ultra-aggressive and compact design that conceals a plethora of cutting-edge components, including support for up to full-sized NVIDIA GeForce GTX 1080 GPU, up to 32GB of DDR4 RAM, and dual NVMe PCI-E Gen3 x4 SSDs in Super RAID 4 with data speeds of up to 3300MB/s.

When it comes to cooling with all of the high end performance parts inside, fret not. The MSI AEGIS series will guarantee exceptional cooling and silence even under the most stressful battles with a patented Silent Storm Cooling 2 thermal design, whereby it will pull cold air from a couple of different chambers in order to individually cool components. Not only that, it boasts of a unique internal structure that separates a 600 Watt power supply from the main chamber, increasing thermal efficiency and allowing gamers easy access to components. The MSI AEGIS X also incorporates built-in liquid cooling so that it can take overclocking to higher levels.