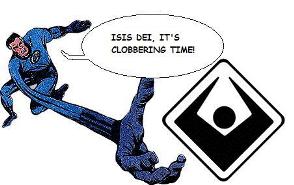 Isis Dei had a very interesting way of displaying their products at CES as the amazing dancer Robert Muraine (aka Mr. Fantastic) completely busted a move for them at their booth. Isis Dei also had on hand their latest products.

The Pistol Whip is a neoprene case made for PCs and Macs that comes with a set of matching, limited-edition, Skullcandy Smokin’ Buds. The Love/Sacrifice is also a neoprene laptop sleeve, but it is wrapped with a silky lycra blending fashion with designs by Alent Priyandi, famous Indonesian graphic designer. The Riveria is another fashionable laptop sleeve by Malaysian designer Jimmy Tan. The Golden Jimmy is a 24 carat gold toned silicon hardware protection which fits very nicely over the keyboard.

If you have never seen Mr. Fantastic from television, most notably his recent appearance on Superstars of Dance, Mr. Muraine is a man whose dance styles are quite unique. His whole body is quite flexible, hence the name Mr. Fantastic, like the leader of the Fantastic Four.

Unfortunately, Reed Richards (superhero Mr. Fantastic’s not-so-secret identity), his wife Susan, his brother-in-law Johnny, and best friend Ben Grimm do not approve of Mr. Muraine’s choice of stage name. They have chosen to retaliate, as you can see from Richards’ wanton attack on the Isis Dei logo.

Taylor Shupe, President and Creative Director of Isis Dei, does not appreciate the response of the world’s greatest super team: “Of course we appreciate the Fantastic Four’s heroic intervention of such villains as Doctor Doom and Galactus, but we think their response to our CES Booth is completely uncalled for. We assumed that Mr. Muraine was given permission to use Reed Richards’ moniker, and don’t think we should be held accountable.”

Okay, those last two paragraphs were a complete joke, but Taylor Shupe is head of Isis Dei, Isis Dei has some great products, and Mr. Fantastic (Robert Muraine) is a great dancer. If that whole Fantastic Four thing was real, I would definitely tell Reed Richards that he shouldn’t complain about getting his name stolen when he is clearly stealing The Thing’s tagline.