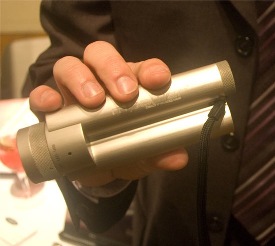 Well, this amazing gadget for men was designed by the car gods, and, by that, I mean, Porsche. Porsche Design Studio equipped the mPower with two widely available CR 123 3 volt lithium batteries. But what makes this flashlight the tops is it also includes a “groundbreaking reserve lithium battery with a shelf life of at least 20 years”. Most emergency flashlights work with a cranking handle similar to emergency radios, but this one doesn’t even need it.

That’s right, a shelf life of 20 years. I have no idea how long of an actual shine you would have with this, but dang, that’s 20 years! Gilligan and his friends could have used this. By the way, he could have charged some electronic devices like mobile phones, since the device has an accessory USB connection. Maybe that’s how the castaways of Gilligan’s Island listened to that radio all those years. Am I the only one who ever noticed that the batteries of this portable radio never wore out?