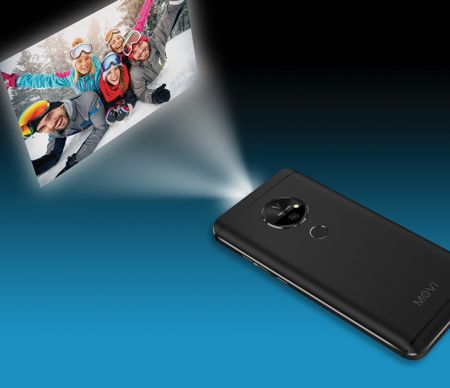 When it comes to enjoying movies while you are on the move, many of us have resorted to copying a movie file onto our smartphones. The very thought of catching your favourite movie on a larger sized display is nice, but not so when you are mobile and need to move around frequently. What if there was an amalgamation of a projector and a smartphone? This idea is definitely not new, first mooted and developed by Samsung, before others such as the Logic Bolt Projector Phone made it to the market. However, these handsets did not really take off in reality, but the idea lives on through the Movi Smartphone, with Wireless Mobi Solution, Inc. being the driving force behind this device.

The Movi Smartphone will arrive embedded with a laser, high definition (HD) 720p pico projector that ensures users are able to utilize many kinds of surfaces as an additional screen. Doing so lets them enjoy and share digital content which range from movies to videos, games, photos, and others. Sounds like the Movi Smartphone has a whole lot to achieve, but fret not, it will arrive with enough processing power to deliver best-in-class performance when it comes to mobile computing and graphics capabilities while taking up minimal power.

The projector itself will be powered by MicroVision’s PicoP Scanning Engine, instantly throwing a screen of up to 100-inches in size regardless of where they are. The 32-bit MediaTek processor is powerful enough to handle virtually any task that you throw at it, while there is a 16MP shooter at the back with a front-facing 8MP camera. One main area of concern when it comes to projector smartphones would be the battery life, and the Movi Smartphone intends not to disappoint in this department. It claims to deliver an extended battery life, where using it with a certified power adapter enables the handset to be charged up to 4 times faster compared to traditional charging methods.