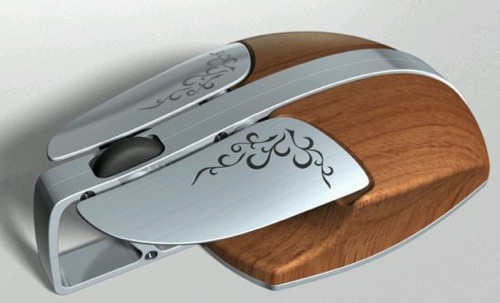 As common as a computer mouse is, there are few that could ever be considered artistic.  Some are shiny with LED lights or small crystals, yet they have a certain mass produced look to them.  This mouse designed by Andrey Chirkov is one of the few I would call artistic.  Surprisingly it’s not steampunk either, that usually is the only way gadgets get a little bit of a creative twist to them.  Instead this has a minimalist modern look, while still being pretty.

The down side of such a mouse is that I’d be petrified I would break it, since it does have a flimsy look.  You’d almost rather put it on display than mess it up by using it on a daily basis.  As of now it’s still a design though, so you won’t be able to purchase it.  However, with a look like this I’m sure those with plenty of money to burn will be dying to get their hands on it.  Wealthy investors means that this might actually be created for purchase.  Even if that does happen though, the general public won’t likely ever see anything like this at their local store.

1 thought on “The Mouser is sure to turn heads”