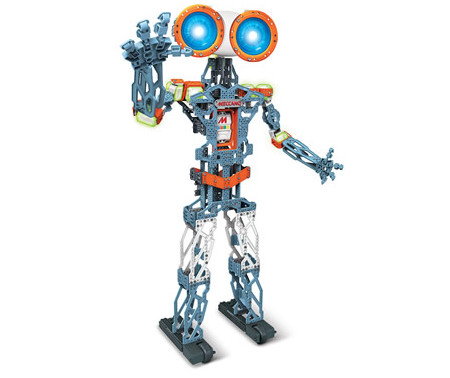 Have you watched the movie Chappie already? Stories about robots having personalities of their own are always worth exploring, although you can be sure that such robots will end up on one end of the spectrum or the other – that is, being a good robot that means no harm to society but rather, wants to integrate with them, or an evil persona who is hell bent on seeing humanity destroyed. Having said that, robots are cool to have around, especially humanoid ones. Here is the $399.95 Motion Mimicking Mechanoid that makes use of advanced motion detection technology to mimic its owner’s upper body gestures.

This is made possible thanks to a sophisticated microprocessor that will drive the integrated servos within its arms and feet, resulting in realistic movement. There is a cradle in the mechanoid’s chest which will be able to accept either an iPhone or Android phone (this is a non-negotiable, sorry Windows Mobile users), so that the robot can “see” using an app with the smartphone’s camera, which then paves the way for it to recognize and mimic hand, arm, shoulder, and head movements. Made out of more than 100 durable plastic pieces, it has a rechargeable battery that provides up to one hour of operation from a two-hour charge using the included AC adapter.