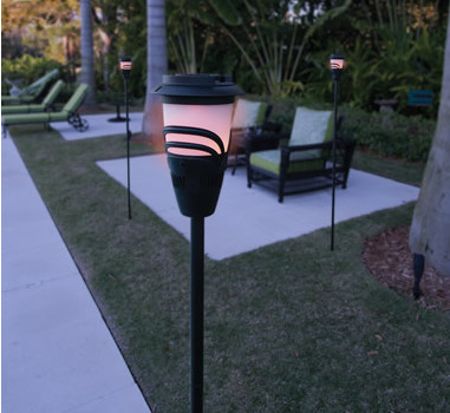 To spend a quiet evening in the garden, with your best friend and mate, while having some snacks at hand is definitely one of life’s small pleasures. The thing is, there are also other unwanted guests around – such as nasty insects that might just irritate you with their bites and stings, with the blood-sucking mosquito being one of the chief culprits. Not everyone has the time to slap on a generous amount of mosquito repellent before that, so why not do your bit for just about everyone in the vicinity with the $89.95 Mosquito Repelling Flameless Torches?

The Mosquito Repelling Flameless Torches, as its name suggests, will be flameless patio torches which release an invisible insecticide. This invisible insecticide will be able to repel mosquitoes for hours on end, where it is a synthetic version of a naturally occurring insecticide that is found in chrysanthemum. Apart from that, a flameless butane-fueled heater will do the job of vaporizing the virtually odorless repellent in order to create a 15′ x 15′ zone that would not only be unbearable to mosquitoes, but other biting insects to boot. The quartet of LEDs will cast a gentle amber glow sans the heat and smoke of an open flame for up to 40 hours if you were to turn on the highest of three brightness settings.