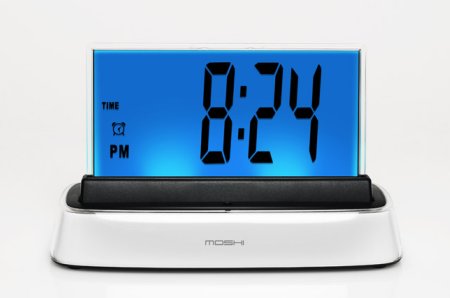 Moshi has just released its IVR Alarm Clock that comes with TimeSet technology, and is the first clock in the world that allows you to set not only the time but alarm simply by speaking to it. Commands are initiated by saying, “Hello Moshi” (sounds like a Motorola ad, eh?), where it will respond accordingly with, “Command Please.” Hopefully the Interactive Voice Recognition technology used is sensitive enough to cater for even non-native English speakers. There is a total of 12 Voice Activated Commands to choose from.

The IVR technology utilizes an unique hybrid model of Neural Net and HMM Phonetic Speaker Independent (SI) Recognition software. It allows for large vocabulary recognition which is highly accurate, noise robust and capable of accommodating a wide variety of accents. Without any pre-programming, each Moshi IVR Alarm Clock can recognize every user’s voice right out of the box. Advanced features such as continuous word and phrase spotting work to eliminate the limitations of “discrete word command-and-control,” creating a more natural user interface. The Moshi IVR Alarm Clock is continuously screening conversations, waiting for the user to initiate by saying, “Hello Moshi.”

It will be available for $49.99 a pop, making it one of the more interesting Christmas gift ideas for this year.