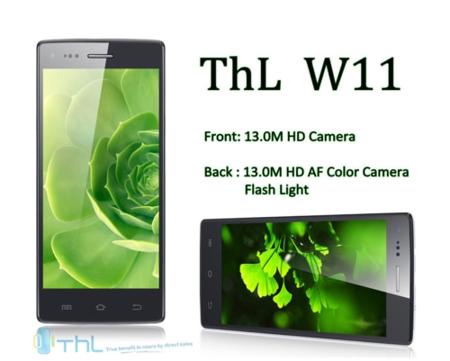 When it comes to high end smartphones, you can be sure that there is quite a fair number to choose from. Sony has their flagship Xperia Z, while Samsung rocks on with the fourth iteration of the Galaxy S series in the form of the Samsung Galaxy S4. As for HTC, the company might not be doing too hot in the past few quarters, but this does not mean that they are left behind the race. In fact, their HTC One has made quite an impressive splash in recent months, and there is also LG with the Optimus G Pro, Nokia with their Lumia 1020, while China-based Oppo has their high end Find 7 model. While these tend to have a camera which works pretty great, so much so that they can even double up as a replacement for your regular digital camera under most casual circumstances, the front-facing camera does capture decent self portraits, but they aren’t enough when it comes to the amount of pixels. ThL of China hopes to deliver far better looking self portraits, with the Monkey King ThL W11 touted to be the first 13-megapixel front camera smartphone in the world.

Just what kind of hardware can we find underneath the hood? Well, the Monkey King ThL W11 will run on the Android 4.2 Jelly Bean operating system for starters, where it will be powered by a quad-core 1.5GHz MT6589 processor, sporting rendering speeds of up to 357MHz, a 5” Full HD IPS display, 2GB RAM, 32GB ROM, and a 2,100mAh battery.

Sure, the front-facing camera might sport a whopping 13-megapixels, making this up the ante by a whole bunch, but the back at 13-megapixels is not going to impress anyone since smartphone cameras these days do come with a pretty high sizeable count. Still, it is enough to take more than decent photos, although we do hope that the quality of the software to process the images taken will be up to par. There will be no LTE connectivity with the Monkey King ThL W11 however, as it maxes out at 3G. No idea on pricing or availability, though.