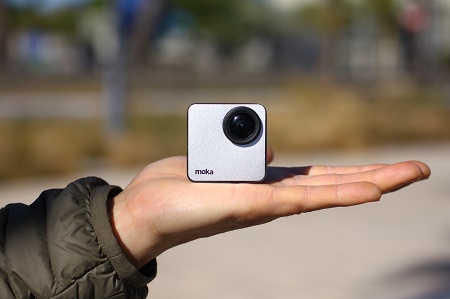 We love taking photos, videos, panoramas and more, but sometimes our phones aren’t exactly quick on the draw. The quality and speed of our phones is only so great, but on the opposing side, getting a good quality camera means not being able to upload everything as quickly. Everyone has heard of GoPro, and while it’s great and all, you have a specific period of time to record before needing to recharge. It is pretty top-tier though, and you don’t normally come across contenders that can pull a new trick out of the hat while keeping the same level of quality and convenience.

While it might have some some shortcomings of its own, the MokaCam is looking to become the “GoPro Killer”. This is a 45x45mm camera that is capable of 4k video, but that’s only one small part of what it can do. It uses a battery with magnets so you can not only affix it to surfaces for recording, but also attach an extra battery through magnetism for another hour of use as well as a rotatable screen with another battery in it for even more recording.

This is water resistant, and you can also get a housing that will make it completely waterproof for underwater shooting. It also has a motion detector to monitor your home, voice recording, and a 7-layer glass lens. It comes in black, gold, and blue, and will cost you $169 for a full setup which includes the waterproof housing, a rotatable screen, and a battery module. If this modular camera performs as well as it says, it really might give GoPro a run for their money.

1 thought on “The MokaCam wants to be the GoPro Killer”