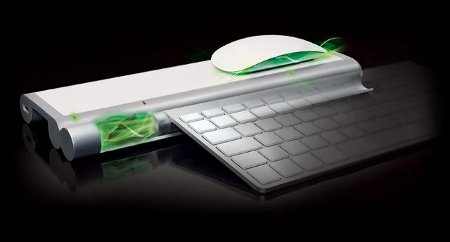 Going wireless is obviously where we’re headed to, and this also applies to wireless charging capabilities of devices these days. Somehow or rather, wireless charging never really seemed to catch on, never mind that (the now defunct) Palm’s Touchstone charger did impress initially but never managed to capture the imagination of the masses. Well you know what they say – if at first you don’t succeed, try again. The Mobee Magic Feet inductive charging system does just that, where it will be able to juice up the batteries which send power to your Bluetooth keyboard, Magic Mouse, and Magic Trackpad – wirelessly. Even better news is you do not need to remove them batteries in the first place.
The Mobee Magic Feet can power up three accessories simultaneously, and since it comes with four USB 2.0 ports, this also functions as a USB hub. On its own when depleted, you will need half a dozen hours to power it, and the $149.90 asking price certainly is not too much to fork out for if you happen to live with a computing ecosystem that comprises devices from nobody else but Apple.
Product Page