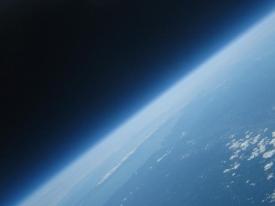 See that picture to the left? Beautiful, isn’t it? Believe it or not, it wasn’t shot by a million-dollar satellite, but a simple handheld camera by two M.I.T. students who haven’t been to space, yet.

Justin Lee and Oliver Yeh didn’t have Dennis Tito’s $20 million dollars to go into orbit, but what they did have was a weather balloon, a styrofoam cooler, hand warmers, a GPS enabled phone, and a Canon A470 point and shoot camera.

They cut a hole in the bottom of the cooler, and positioned the camera inside. They put the hand warmers and GPS-enabled phone inside, so it would not freeze in the upper atmosphere. They tied the contraption to their weather balloon, and the rest is DIY history.

Their device made it up to 93,000 feet, which technically isn’t space, but Project Icarus was high enough to shoot breathtakingly high photos. All of it was done at a relatively low budget of $148.

I will have to salute these two students for their DIY spirit. It reminds me of the Chinese man who built his own helicopter. I like stories like this because they remind us that our dreams can come true with a little technology and a lot of ingenuity.