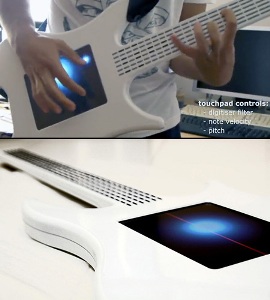 Some of you might remember the opening of Bryan Adams hit song “Summer of ’69”. It goes: “I got my first real six-string, brought it at the five and dime. Played ’til my fingers bled, it was the summer of ’69”.

If Bryan Adams had meant the summer of 2069, then I doubt his fingers would be bleeding after playing a guitar. Why do I say that? Because I have seen the future of guitars, and it is without strings.

If you don’t believe me, then check out the video after the jump. You will note this guy is shredding on the Linux-powered Misa Digital Guitar, and there are no strings, just a light-up touchscreen.

In addition to the touchscreen, the Misa Digital Guitar has over 24 that are very versatile. By the way, it is possible to interface this guitar with the user’s PC.

Clearly, the Misa Digital Guitar is a product of the Guitar Hero/RockBand generation. It is made for those who are willing to accept the discipline of learning how to play a real instrument, but want to really break out of the box when it comes to what traditional instruments can do.

So, a guitar without strings? What’s next, a piano that doesn’t have keys? I suppose you could do just as good with a wide touchscreen that replaces the traditional 88 keys.

(Just on a side note, Bryan Adams was born in 1959. During the summer of ’69, he would have ten years old. And yet the song “Summer of ’69” seems to imply that he was a teenager during that time.)

The best digital picture frame is the Pix-Star PXT515WR04. It has wireless connectivity with a special app that’s compatible with IOS and Android platforms and it supports a USB stick as well as SDHC or SDXC memory cards.

10 thoughts on “Misa Digital Guitar has “got no strings””