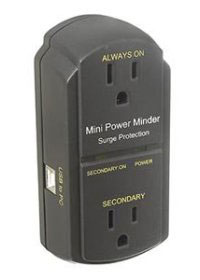 Most of us think that our computers and home appliances hardly take up any extra energy when they’re in standby mode, but we are sorely mistaken as research shows one could simply save a few hundred dollars each year by turning off the PC when we’re sleeping instead of leaving it on to download miscellaneous programs. Why not get some help from a gadget that is smart enough to know whether your PC has been shut down or not and do the necessary honors on your behalf? This magical device exists in the form of the Mini Power Minder which retails for a mere $14.95 a pop from Amazon.

The Mini Power Minder works its magic when you connect your computer to the top of the device via USB, where the USB connection acts as a failsafe device that detects whether your computer has been shut down or not. Should the answer be in the affirmative, the Mini Power Minder will then automatically cut off all power to the second outlet within a stipulated time period. This means all other devices connected to a multiple power outlet strip will also lose their power, ensuring standby modes do not suck up more energy that you would want to use.

You might think this is pretty trifle, but how many times have we actually turned off the PC without bothering about other appliances that share the same multiple power outlet strip? Those who are frequently in a rush will definitely find the Mini Power Minder a useful tool in their everyday tasks. Truly a plug-and-play device, the Mini Power Minder helps you save on the energy bill where you can use the savings to invest in, er, other power consuming items like a shiny new console.